We've had another fantastic weekend of fun and games and the weather has been FANTASTIC! The first group we had on the weekend was Jonathon and the lads who were stopping at the Premier in in Cardiff on their Big Stag weekend activity. The had been on a quite night out in Cardiff on the Friday(not) and then were with us on the Gorge bright eyed a bushy tailed on the Saturday.

The next group we had was James, Ben and the boys from Bristol who were definately ready to get stuck in, they had travelled down in the morning and were staying at the travelodge in Cardiff City Center, reday for their BIG stag night out.

Both groups got suited and booted in wetsuits, Bas and helmets and off we went, after sutch a hot day the first jump was an eye opener with the water playing its part on the boys and giving them that lovely cooling effect. Jumps, climbs, crawls, holes, waterfalls we did it all and evan the notorious step of DOOM!

Get weekend boys and I hope you had a great stag night in Cardiff, by the look on your faces I'm sure you did. 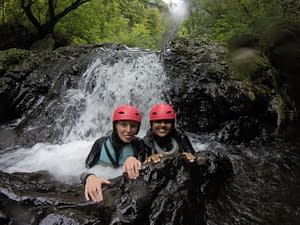 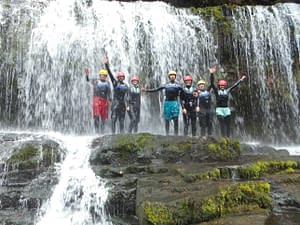